Last Christmas Jake lost one of his top front teeth. And so we waited for the permanent tooth to grow in... and we waited... and waited.  Finally, in August, a teeny tiny point started to push it's way through his gum.  Jake smiled at it in the mirror and would say, "Well. Look who finally decided to show up!"

But then the point kept growing down and we thought, "Oh no, this tooth is coming in really crooked... How much do braces cost!?"
But the worst part for me was that Jake lost his sweet cheesy grin.  He was very self-conscious of what he called his "shark tooth".  And out of two months of pictures, this is the only one I could find where I caught him with his mouth open enough that you can see the pointy front tooth. 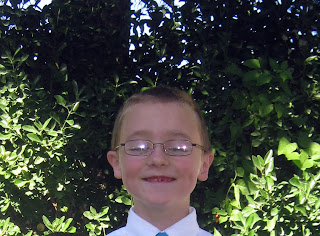 Today we went to the dentist and after several x-rays, quite a few tears and a cleaning where he made those dental techs really earn their pay, we discovered two things.  Jake inherited his mom's gag reflex, and an extra tooth from his dad.
We decided it would be best to go ahead and pull it today because it needed to be done sooner than later, as it was making the real front tooth grow sideways instead of down.  Jake was not happy with that decision, but I thought it would be better to get it over with and not let him have a few days to work himself up into a panic attack.
(The moral of this story: When going to the doctor's or the dentist's, never promise your child that they won't have to get a shot. Because you just never know what is going to happen once you get there...)
So Jake had his first experience with getting Novocaine. He is definitely not a fan of having a numb mouth.  They pulled the extra tooth and put it into a little treasure box for him. 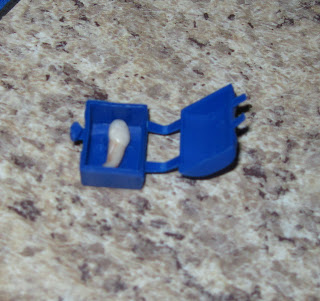 He was attempting to smile for me, but said it was hard when he couldn't feel exactly what his lips were doing. 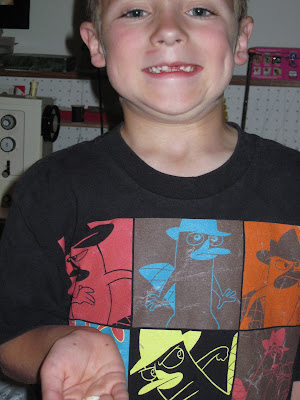 One more time to show the hole where the extra tooth was. 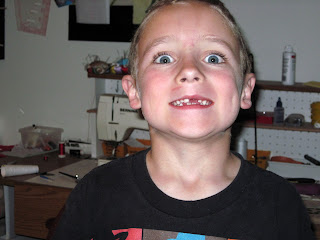 I don't care if the Tooth Fairy has to fork out double the going rate. It's worth it to see those dimples again!

That is a HUGE root!

Once more I felt greatly rewarded for taking a browse through your last few posts! Jake and I have many things in common . . . we both hate going to the dentist, we both excel at math and neither of us are particularly picky about what we wear! Sorry about the tooth trauma Jake. Keep in mind that as yucky as getting Novacaine is, the alternative really stinks. Glad to see your smile back:) Love y'all, Sandra
P.S. I think that the outfit that YOU picked out rocks!