I was originally going to title this post something like "I am back, just in case you noticed I was gone..." But then I got a call a few days ago from my aunt. She was checking to make sure I hadn't fallen into a well, or something equally horrible, since I hadn't posted in over 3 weeks! I know, I know, I totally threw the blogging universe out of alignment with my lack of posting... (self-important? me?) But I was reassured that I have loyal and adoring fans out there who were wondering just what was going on. Nothing very dramatic, more along the lines of technical difficulties. I.E., the laptop died and I couldn't figure out how to change the batteries in my cordless keyboard downstairs. (Shut up Josh.) A quick call to my dad and a few simple instructions later I am back in business.

So the last month in overview, just in case you are interested...

Went to Bear Lake, had a blast and got totally fried. Spent the next week skulking around like vampires and not leaving the house until the sun went down,(Hey, vampires are in right now.) and then spent a week and a half looking like I had leprosy while the burn peeled off. Spent a lot of time knitting and sewing some birthday presents for my soon-to-be 4 year old. Went camping/fishing, had a blast and a faulty air-mattress so didn't sleep. Also forgot just how exhausting camping with an 18 month old is. Jake attempted to crack his sternum flying over the handle bars on his bike and ending up with a rather spectacular bruise and a new bike rebuilt by his Uncle Patrick. Evie has been on birthday countdown mode since Jake's birthday in May and is pretty excited about her first ever friend party! Lila got her first haircut and started attending Nursery. And after 31 years I have finally figured out a system that gets me a house that is clean all at the same time! Tucked into all that we have gone on a breakfast picnic, gone to the drive-in, used the public transportation system to go have lunch with Brian, gone to the Children's Museum, had a baking lesson with Grandma-Great, gone swimming, to the library and watched awesome fireworks off Grandma and Grandpa T's deck. Throw in a couple of birthday parties and church activities and I am going to need a month to recover from our summer before school starts! Many of these things are posts in and of themselves and will be coming with pictures soon, but for now I am just trying to get back in the habit of writing. Hope you missed me enough to read my rambling, and maybe even comment? Pretty please?

Evie has a love affair with fireworks.  When she was eleven months old we celebrated her first Fourth of July.  We went to see fireworks prepared to cover her ears and keep her wrapped safe and snug in a blanket so that she wouldn't be scared by the loud booms, bangs, and pops.  (Jake completely freaked during his first fireworks show, cowering and sobbing into my shirt for most of it... so that's what we were expecting.)  Well, she wasn't having that.  The lights and colors completely mesmerized her, and as for the noise...  she took it as a challenge and spent the entire show trying to drown out the fireworks with her shouts and screams.  And it hasn't noticeably changed over the past three years.

Starting last Monday she has told me at least a dozen times a day that we would get to see fireworks soon!  She doesn't give a fig about anything else to do with the Fourth of July, the parades (and around here they throw candy!), swimming at Pa Dave's, barbecue with family and friends. Nope.  For this girl the Fourth of July is all about the fireworks! 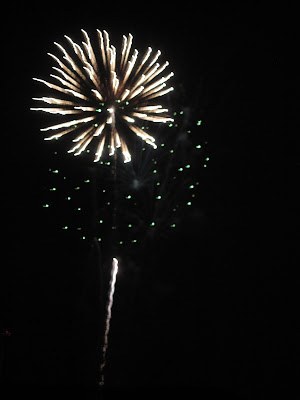 Evie enjoying a Fruit-by-the-Foot snack while we were waiting for the show to begin. 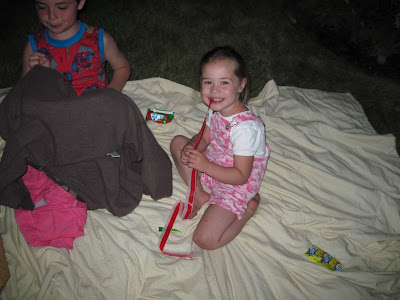 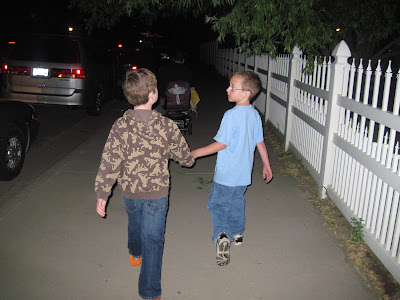 Jake and Jack, what buddies! 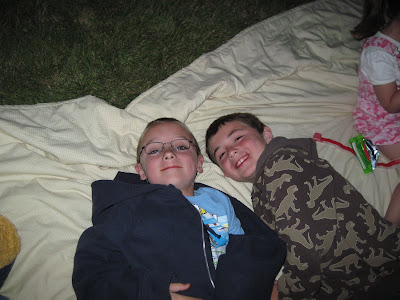 Poor Lila definitely took more after her brother than her sister in her enjoyment of fireworks.  She didn't seem to mind them so much last year, but I seem to remember her just sleeping through them because she was so little... 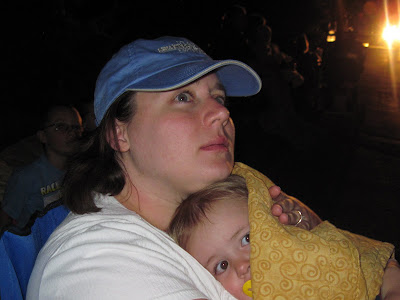 Seriously, could that girl's smile get any wider?  I'm glad that you love fireworks so much my Evers, it makes the holiday that much more fun for the rest of us. 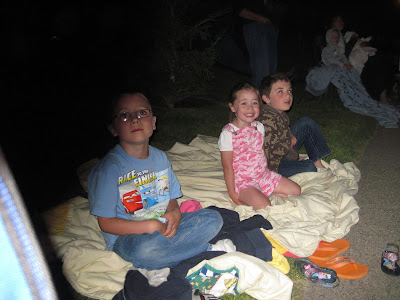