Happy Birthday to me!

Yesterday was my birthday. It was a good day. I got up early, went to the gym, went to the grocery store, went to an eye doctor appointment, came home, and cleaned the bathroom. As I was scrubbing the bathtub I thought, "Yup. I'm a grown-up." Then I hurried to make a pesto potato salad for the baby shower that I was hosting.


That night Brian and I went out to dinner, which was a special treat since I've been doing this new diet.  (I was so excited that one of my off days fell on my birthday!)  He was playing around with his new phone and snapped a picture of me.  Later I was comparing it to the one he took of me when we went out for our anniversary one month ago.  I don't know that you can tell from these pictures very much, since they are really just my face and different angles, but I have lost almost 8 lbs. and several inches! That was probably the thing that made me the happiest for my birthday. Brian also gave me a great card and a gift card to go get some new clothes, since mine are getting pretty baggy. Hopefully in another two weeks it will be a necessity! 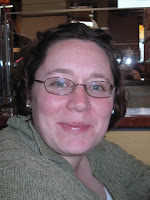 After dinner we fought the snow up the hill to my in-laws to pick up our kids. I was ready to go home and get to bed, but Jake reminded me that I had promised him he could rent a video game for helping me clean the house and get ready for the baby shower. So we right instead of left and headed off to Blockbuster. Evie excitedly decided that she was going to look for a Telly Tubbies video.  Brian quickly  said, "No. We are not having Telly Tubbies in our house!" Jake, sounding very puzzled, asked, "Why Dad? They'll teach her German.... then she'll be bilingual!"  I know having that kid around helps me burn extra calories from laughing every day!